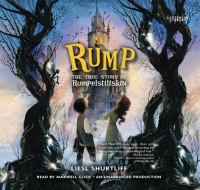 The True Story of Rumpelstiltskin

Relates the tale of Rumpelstiltskin's childhood and youth, explaining why his name is so important, how he is able to spin straw into gold, and why a first-born child is his reward for helping the miller's daughter-turned-queen.
Publisher: [New York] : Listening Library, p2014.
Edition: Unabridged.
ISBN: 9780804168052
Branch Call Number: J CD FIC SHURTLIF
Characteristics: 7 sound discs (7 hr., 52 min.) : digital ; 4 3/4 in.
Additional Contributors: Glick, Maxwell

excellent
I believe children much younger than grade 4 would enjoy listening to this book.

Liesl Shurtliff has a great imagination that draws the reader or listener into the story of Rumpelstiltskin from his viewpoint, evoking sympathy from the audience for Rumpelstiltskin's plight.

Rumpelstiltskin's mother passed away soon after he was born, leaving him with a whispered name, (names were carefully chosen because they were believed to determine a person's destiny). Unfortunately, those around only heard the first portion of his name, and he was known as Rump. When he is twelve years old, he learns of a magical ability he possesses shortly before his grandmother passes away, and hides the possession of this ability from her. After his grandmother passes away, Rumpelstiltskin finds himself in a precarious position as the repercussions of using his magical ability begin to surface. In a quest to learn his destiny, he embarks on a journey that unfolds a number of surprising elements.

A beautifully woven and well-read alternative fairy tale threading elements of the book series and of the usual fairy tale to make the story into a not-so-usual tale.

There are no ages for this title yet.

There are no quotes for this title yet.