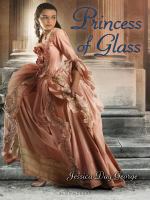 My favorite book of the trilogy of the twelve dancing sisters! I love it! SO sad when I finally finished it!

Well, I did not enjoy this book. (SPOILERS AHEAD). Although I didn't have a high expectation going into the book, I was still left feeling disappointed. Princess of glass is part of a trilogy by Jessica Day George. The novel follows our main characters, Poppy and Christian. In the beginning, they are friends, but as readers, we don't read a lot of scenes with them together. But then there's Eleanora... I did not like her at all. Her character was hard to follow because you never knew what side she was on or what she truly felt. This curse that she is under was somewhat captivating in the sense that people used charms to prevent its influence. I despised her and Christian and although some might say there was a love triangle I truly didn't see it. There was no point in the book that Christian or Poppy had romantic feeling towards each other (until the end). I felt that the author should have focused more on the main characters relationship instead of side ones. I usually adore fairytale retelling books, but this one didn't cut it for me. In my opinion, it wasn't even a retelling and I was just left trying to connect the dots. Overall it was less than okay and was put under the category of "Bad book, but not bad enough not to read" 2 stars
@bibliophile of the Teen Review Board at the Hamilton Public Library

Easy to sympathize with the characters.

This is a retelling of the Cinderella fairytale.

This was an amazing book! I liked the first one (Princess of the Midnight Ball) but I couldn't put this one down! I just got the books yesterday and I've already finished both of them. Does anyone know if there's another? Anyway, all in all, an excellent read. Jessica Day George provides an excellent twist on the traditional fairytales, and I love everything about her books. I love the kingdoms, I love the Westfalian princesses, I love Marianne and Dickon and Roger and Christian (although Ellen made me so frustrated I wanted to strangle her). I'd definitely recommend this.

I thought this book was awesome no matter what others say. I was reading some of the coments and i love prince christian so I have to defend him, the only reason christian was falling for lady Ella was because he was under a spell like everyone else at the ball so I don't think he was dumb at all. Dickon and Roger were my fav characters also poppy, read the book it's amazing

I felt that this was a very good sequel to the previous book, but I expected a little bit more then I actually got. Although I love this book because characters are more explained and defined then the first (I got confused in the first book about the order of the sisters from oldest to youngest, mainly the younger ones), the book could have been better. I know that if Poppy had had a fiery, strong-willed prince they'd both probably be screaming their heads off at each other within a week of their marriage. But, honestly, I didn't really like Prince Christian. If I had to choose between the three eligible males in this book, I'd have to go with Roger. Christian is made out to be kind of a dumb (sorry to offend anyone) character when he starts falling for Lady Ella. But, for those fans who like him and would marry him in a heart-beat (or who just don’t think it’s fair for me to call him dumb), I will say this. When you read this, you read it from three different perspectives: Poppy’s, Christian’s, and Eleanora’s (or Lady Ella). So, because we can see the story from Poppy’s and Eleanora’s perspective as well as Prince Christian’s, we begin to wonder how on earth he could get duped so easily. Maybe that’s why I don’t like Christian that much. Also, the traditional end to the story (Prince, glass slipper, etc.) is weak and I expected more. I think that if the author had taken more time to write this, it could have been more polished. But, to be fair, in this book the characters are better and I loved seeing Poppy as the heroine. This is an excellent continuation to the trilogy. I can’t wait to read Princess of the Silver Woods. And you have a good point, KeziahTodd.

Not nearly as good as Princess of the Midnight Ball. I found the plot to be confusing (not just complicated, which is obviously good), and the ending disappointed me. LOVED that it was connected to the first book, though, rather than being a stand-alone!

Black_Cheetah_99 thinks this title is suitable for 8 years and over

goldengazelle thinks this title is suitable for 12 years and over

Poppy is visiting a neighboring country when a mysterious lady starts stealing the hearts of all the men. The lady is helped by a horrible witch, when the lady realizes her mistake Poppy helps to defeat the witch.

Princess Poppy of Westfalin, a secondary character in one of George's other story's, is sent to Breton as part of the royal exchange program (for those of marrying age, of course). Having once been forced to dance by an evil magician, Poppy refuses to dance. But when a the mysterious Lady Ella comes to a ball, and when every man becomes enthrealled with her, its up to Poppy (with the help of her cousins, Prince Christian, and Lady Ella's childhood sweetheart) to put a stop to Lady Ella, and her Godmother. Roughly based on Cinderella, this is a great story, just like all of George's books. To get the complete story, read the prequel to 'Princess of Glass', "Princess of the Midnight Ball'.

"On the heels of the success of Princess of the Midnight Ball (2009), George’s sequel follows one sister, Poppy, to Breton. While staying with her Seadown cousins, Poppy’s eye is caught by Christian, the Crowne Prince of Danelaw, and a romance begins to bud. But a maid in the Seadowns’ home, Eleanora, somehow manages to get a gown and attend the ball, appearing to cast a spell over the men in attendance. In a clever reworking of the Cinderella story, George once again proves adept at spinning her own magical tale. Fans of Donna Jo Napoli’s retellings will cheer loudly as George proves her own mettle." — Booklist