Saved Searches Advanced Search
In an abundance of caution to our customers and staff due to COVID-19 coronavirus, all libraries are closed until further notice: Important Library Updates.
Print 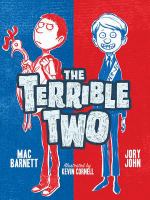 This book is great , funny ,and a perfect reading level for kids 8+ up
_ Mr.Poo

My 9 year old thought this was a very funny read.

This book is awesome!! Cody Burr-Tyler Thought this was an awesome book too. This book is funny. Cow joke:Where do cows go for lunch? The calf-eteria

SUPER funny!! Great 4 pranksters who love to read!! If you liked this book you HAVE to read the 2nd book. (The terrible two get worse)!!

This book was really booked and it needed a lot of thinking to create a prank,and this book,and a lot of cows

I heard Cody Burr-Tyler absolutely LOVED this book. Also, could the cover be any more spoilery? Still pretty entertaining to read.

I read this aloud to my 6-year-old. I would probably recommend for age 8 and up, but we frankly roared with laughter by the end of the book. What a great read!

Miles Murphy was the prankster king at his old school, then he had to move to boring, old Yawnee Valley, famous for its abundant cow population. Miles is not happy. He will have to establish his pranking cred all over again. Enter Niles Sparks, do-gooder extraordinaire.

judynostrant thinks this title is suitable for 6 years and over

WVMLlibrarianShannon thinks this title is suitable for 8 years and over

In the book The Terrible Two, written by Jory John & Mac Barnett, there is a kid named Miles who had just moved to Yawnee Valley. He was the greatest prankster at his old school. At his new school he wanted to be the greatest prankster they had ever seen, but they already had a school prankster. They don’t like each other first, but they end up friends in the end. At the end they team up to pull the biggest prank that Yawnee Valley had ever seen.
Written by Grayson

On my honor I will do my best:
To be good at being bad;
To disrupt, but not destroy;
To embarrass the dour and amuse the merry;
To devote my mind to japes, capers, shenanigans, and monkey business;
To prove the world looks better turned upside down;

For I am a prankster.